Well, another wonder-filled day.  Typically this time of year, the end of the year days, are chaotic, loud and scattered. However, for this group that is not the case. These last few weeks have been easy, and very group oriented.  And so, that is what this day was filled with.  I will say again, their age and development is apparent as they so easily immerse themselves with greater focus and interest than in prior months.

The entire days weather was warm and easy. We were filled with cooking, beading and the usual exploring and we set up our “camp” in the Sunny Spot where the grasses were cut and all that we needed was within easy reach.

Their play with the Newts did appear to shift to a more aware state so no dead, or almost dead friends today.  Some say,  just let them kill all that they want and they will grow out of it.  After decades of exploration on this from many points of view I stand with what I shared from last week:  Role Model  support and respect to all beings great and small.

We had no story or circle today as we went straight to setting up our “kitchen” on the picnic table that was in the sun.  There the children all worked together to make the pancake batter to dip the Elderberry Flowers that we gathered last week.  We made tea from them and Fritters plus pancakes with butter and raw and fresh honey.  One by one they dipped their Elder flowers in the batter and Ruby cooked them up. 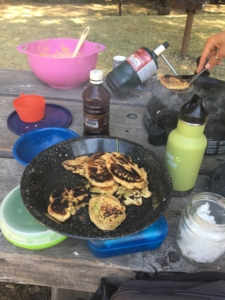 There was some reluctance by some to actually eat the flower that they could see in the pancake but the pancakes themselves, well there was no trouble eating those!!

After snack, they went to play for a bit and then they came back to two buckets of water. One with warm water and one cold. One for washing and one for rinsing. One with two sponges and one with out. From there they all washed all of the dishes, dumped out the water, put clean water back in and laid out their dishes on the picnic table.

And then, a request made by Avaline, I became the Monster, but, it was an Old Lady Monster. She was slow, but sneeky!  For quite sometime after I hid, made bird sounds, snuck around and they ran, hid, laughed, and went different directions as I continued my slow yet persistent part of the “game.” 🙂

Devin and Austen were coupled together and being buddies pointing me out when ever they could.  I made my way past the waterfalls and over the rocks. They followed. Devin told Austen it was really hard for him to cross there and they figured something else out, together.  Vita, Avaline and Puma went way down the creek and I finally snuck up on them but then THEY SNUCK UP ON ME!!!!  What fun!!  We then went back to lunch.

After lunch, the sun was way up with not a cloud to be seen. We had our story last week that included a blue bead and they even found beads that they got to keep.  Well, Ruby had a big box of lot’s of beads so, we brought those out for them to do something with. But oh dear, why am I sharing?  You are going to get something special soon so, no more to be said here!!!!!! And that was the rest of our lovely day and we will share more come the right time.  🙂

Back home with fun in the bus all the way back.