Everyone was here and the air and energy was that of ease. The Halloween season is over. The intensity that came with that over the past couple of weeks clearly has settled and was palpable in the children/in the group.  And now, we were off to yet another beginning.

Fall is truly here as the days are so much shorter and growing shorter still, the leaves are and have fallen as evidenced upon the ground yet the Days are still warm like a cooling summer.  The past three years have brought unique weather different than any other year prior.  We are being called upon to exercise our ability to be flexible, creative and deeply observant as to what the Natural world is doing with all of this.  How are the plants responding? Are they growing the way they usually do? Are the berries from certain trees being altered by the weather???  And on goes the curiosity that arises from change.

The day began by noticing if anything was different in the bus. Then a game where they close their eyes, I change something, they open their eyes and see if they can see what has moved or changed.  We played this a couple of times with great delight. Then, what will be different or the same at Lake Lagunitas today???  And, as soon as we got there we DID find something differient, we could not park where we usually do as there was a little digger machine with a big truck filled with dirt.  With that, we did something brand new, we parked in a spot near the creek on the other side of the parking lot and had our day set up in a completely different spot!!   From there wonders continued.

Before Circle I went to go hide Trilly Trully and Trippy Troopy and made a trail of little felt balls made last year that were scented with either Lavender or Lemon essential oils.  While I was doing that they were playing a game we have been playing before circle, Butterfly, Butterfly FLY. When I came back they were sooooo happy and having a great deal of fun. Then I brought them into the next game by smelling the bottles of the essential oils and guessing what they smelled. Then they went on the adventure.  It was fun, as I walked them across the road and up a hill, they realized that they knew this place very well!!

We all became dogs using our noses to sniff the ground, the plants and many other things along the way until, THEY FOUND THE SMELLY FELT BALLS that led us to Trilly Trully and Trippy Troopy!!  Eamon found them so he received the treasure that they were holding, a small felt ball. And, sometime this year they will all make their own.  Then, back to circle!

Last week I brought in my Kalimba that looks something like this. 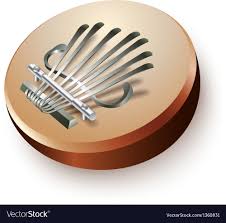 I have been playing gentle music and using it for songs and part of story.  They have had an opportunity to play it which they truly enjoy.

Today I used it to introduce the “True” story about Humpty Dumpty. This is a tale about the deep need and value of giving gratitude “Even in the darkest and gloomiest of days.” Also at circle we drank Rose Hip tea from the Rose Hips that we harvested last Thursday.

After circle the boys went straight to play down by the creek finding different”homes” and wonders.  The girls all helped wash the dishes by filling the buckets with water, washing the bowls and cups and then putting them in the drying rack.

While they were doing that I played with the boys for a bit and then brought out the Madrone Berries that we harvested last Thursday. I brought out needle and thread.  Holden was the first to show interest, great interest actually. He got his needle and thread and began to sew.  There were some tricky parts to that as the thread came out often. And, without any prompts, he just kept re-threading it!  Then Eamon came and did the same.  Then they all came and Ruby and I worked together to get them all set up. There they were ALL in a tight-knit circle sewing their own bracelets or necklaces with focus and delight.  Luna was convinced that she could not do it and that she would get poked by the top of the needle. She then discovered that she did NOT get poked or hurt and was in ongoing and great DELIGHT that she could DO IT!!  She just laughed with her success.  All the children helped each other out as well when they got stuck or frustrated.  Then, off they went to do what preschoolers do, play, incorporate and explore.

By the time we finished all of this, it turned out to be a bit after lunch hour so we set up and had a long leisurely lunch.  After that some fun chase games, running across the creek, and Holden getting changed from getting wet earlier and Ellie pooping alongside him came about. 🙂

When we went in the bus all the necklaces and bracelets were hanging from a beautiful branch around our blackboard. There Ruby drew our picture of the day and off we went. The entire ride home I played the Kalimba, told stories and we all created a song together with different sounds that they offered.  Phew, what a full, flowing and beauty filled day!