Everyone was here on our first day back from Mid Winter Holiday. The weather was winter warm with Sun shining. At first quite cold at pick up, then warm, then colder breeze coming in by days end.

When we first got to Alpine lake the first thing, check on the NEWTS!!!!!  Were any egg sacks still there?  Were there any teeny newts swimming around? Older Newts? So many questions and only one thing to do, go and see!! So that is what all but Devin did. Devin LOVES to be a helper and he helped Ruby set the circle time up beautifully while the rest of us had a GRAND time searching all along the creek to see what we could see. There were some places, our first place where we originally saw the egg sacks and all the newts mating, was pretty slim pickins as far as egg sacks and any newts. We then went upstream and then downstream. Different areas had differing amounts of egg sacks and NO NEWTS! Yup, all the newts had left.  And from my research, that is the way it goes. They go back to their land world and will come back one to two years later to the same spot for mating time again.

So, come on to this spot right now and see what you might see. Maybe the young newts with tails and gills will be swimming about for a time until they become terrestrial.

Devin and Ruby finally came down and the children showed them all that they had found.  I went up to finish different parts of circle and then called them all in.
At circle we had, what Owen called “the best snack EVER at Tender TRacks.”  I made a gluten, egg and nut free banana bread and they had it with sunflower butter and a little bit of raw honey.  Who knew the bread would actually taste good!  We then heard another adventure of Trilly Trully and Trippy Troopy, who, by the way, had to be found before circle time again!  They are such adventurers.
The story was about them learning how to grind wheat, find Willow saplings and make stick bread over a fire.  Right there in circle the children saw the grinder at work and after circle they got to have their try at it.  But before circle ended they got their new jobs.  The Weather watcher now is the one that strikes the Singing Bowl to sing us out of circle and then lets the Snack helpers know that it is time to pick up all the bowls and cups to give to Ruby.   That person this week was Puma.

After circle Austen and Devin REALLY wanted to grind the wheat we had for them and that is what they did. The rest of them went right down to the water and began playing.

If you look closely here you might be able to get the jist of what this grinder looks like. Is was no easy task to grind this. Austen had an easier time at first, harder for Devin. However, Devin soon figured out a way for his body to do this and off he went, grinding, grinding, grinding, grinding for such a long time.  Ruby shared with me at the end of the day what fun the two of them had talking and grinding together!! 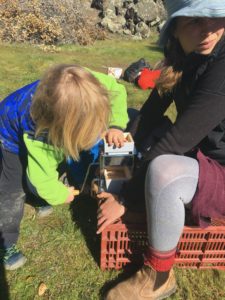 A half hour before lunch I brought them back and they all got cleaned up and changed with our outdoor changing party.  I forgot to mention that Avaline and Puma took a water break and came to grind up wheat while Vita and Owen were having too much fun by the water to leave.

At lunchtime we saw that they had filled up a big container of the wheat they ground for us to use this coming Thursday!  At the end of lunchtime our, always unexpected, impromptu drumming on water bottles and lunch box containers ensued.  What fun we all had as we sang and played.

After lunch, there was much tidying up and all the while Devin wanted us to play with him with his sharp and skilled stick throwing.  Austen joined him and appeased his need to have us grown-ups play with him.  As a side note, Austen was filled with a bit of the agitated trickster today and thought it most fun to do the opposite  of what  might be needed in any given moment. He had a laugh watching us trying to assist him with getting dressed as he played other tricks. In the end, we figured out the playful way to get what we needed to get done.  We all laughed!

After the large changing party the children all headed down into the Old Cat Tail/ Tully grass grove that they love to play in. There they ALL had the finest time!  We then had to finish out what we learned from the story and went on a journey looking for Willow Saplings to harvest for our next day together. We will clean them up and use them to cook our stick bread like Trilly Trully and Trippy Troopy shared on Thursday.

As we walked there was a thought that there were not going to be any Willow trees. However, we DID find LOT’S of young Poison Oak plants so there was much noticing of those little treasures.  We finally came upon some Willow Trees, carefully went down, all the while observing if there were any Poison Oak plants, and Ruby and I proceeded to cut down, with gratitude, 5 long Willow saplings.  YEAH! Then back down the path we went.  They all worked together with holding these very long branches all the way back to the bus.

Today had so much fullness, beauty, warmth of hearts and joy with being together.  What a magnificant first day back!