Vita was still out due to hobbling about still.

The day was filled with great Sun, light, warmth, and aliveness.  We went to Alpine lake for two reasons. One was to be in the Sun and the second was with the intention to take the children to where we took the three-year-olds last week in hope of finding turtles. Well, only the first happened! 🙂  However, what did happen was just stupendous!

We all hopped out of the bus when we got there and they immediately rain down to the newly rushing water down in the lake bed.  Each time we come there is more and more water. So as soon as they got there, out they jumped to CHECK IT OUT!  Puma, Avaline, Austen and Owen went down to see.  I went to share with them that we were going to stay dry this morning.  I so wanted to take advantage of this sun and go on a grand adventure.  Devin was taking his Mom on a special adventure up the big rock.

There were Newts down in the creeks that needed to be seen but then, it was best to have circle time now as staying dry was showing itself to be a bit of a challenge.
We gathered and changed our jobs: Devin: Weather Watcher( this turned out to be PERFECT with what he has been interested in) Owen: Guardian of the Earth ( he shared a story about other people picking up garbage, with delight!) Puma and Austen: Guardians of Safety Avaline: Snack Helper.

They all did not balk even a little at having new jobs and each took them on with honor and pride.  Later in the day, Puma was VERY happy when he got to help Austen with a little scrap he got. Though Austen did not want any of the oil for cuts to be put on. He was convinced that it might hurt. No problem, bandaid went on and the band-aid wrappers went into the Earth Bag.  Throughout the day when anyone found garbage they picked it up and put it in the Earth Bag that Owen happily carried on his pack.

After getting their jobs Devin held up the Weather Watcher stick. We all really took our time noticing where, and where isn’t the breeze/wind.  Avaline noticed the clouds moving in the sky and they all were watching for the wind direction.  We discovered that we were reading the Sky world and the clouds will tell us when the rain will come.  At different times of the day, we checked the clouds out as they changed as well as the wind.  We then sang our songs, received our snack and heard me read a story about Jackie Jack Frosts sister, A Child of the Snow.  We looked for Jackie Frost today but we never saw him!

After circle Avaline, with great ease, picked up all the cups and bowls and handed them to Ruby and then off she went.  She, Puma and Austen started to play Hide and Go Seek. We know this because we heard Austen counting and then looking all around!  Owen joined Austen and they could not find them for such a time.  Puma and Avaline were happily hiding on the other side of the rock and playing.  Devin was making a grand Airplane and took Ruby to Costa Rica!!! She was happy about this, as you can imagine.

I wound up on the top of the big rock with Puma, Austen, Avaline, and Owen. Puma spied some little waterfalls and I was wondering if the paths we saw down below were trails made by deer or people. These paths and waterfalls were in the part of the lake that is usually under water but now, we could see so much.  We all went down to see if we could get close to the waterfalls and, we did. From there a great deal of exploration with the waterfalls took place.  Devin began with throwing things into the water to see how they went down the rushing water. Puma tried to get a very large stick to go down but it got stuck so he and Austen worked at getting it loose with a bigger stick. Avaline and Owen were playing their own watery games there and I was thinking that I could keep them basically dry today so we wouldn’t need a Changing Clothes Party in order to have more time to explore.

Up the beautiful rushing creek we went. Austen and I went up head first actually. What we found was so very, very beautiful. Little rushing waterfalls all around, a Mallard duck couple swimming about and green grasses laying low from the force of newly made streams. Everyone came and we all explored until, (now I can’t remember who found) we found BEAUTIFUL EGG SACKS!!!!  Yes, there were bulbs and bulbs of clear gelatinous bulbs with little dots inside all clinging to a stick, photos below.  We all looked at it for a long time asking many questions.  Austen was convinced that they were mushrooms and very much wanted to pick them off to take a greater peek. We thought it best to keep these things on the stick so, after a time we made our way back to whence we came in order to carry on with the original plan. But alas, Avaline slipped and got a bit wet so, A CHANGING PARTY FOR ONE took place. But then Puma was quite wet and by the time that was all done, it was very much lunch time.

We set up lunch circle in the beautiful sun and had a very fun lunch.  After lunch Devin became the Airplane pilot and went into the dried Cat Tails marsh to play. Puma, was down at the creek and then yelled COME, COME COME!!!!!  We came down to find him holding a female Ca Newt giving birth to her egg sack!!!!  We had him put it down. I confess, I projected my own feelings of being picked up while giving birth and thought it might be best to let her go about her business in peace and ease! 🙂

He put her down, hard though that was for him. We then discovered many, many, many egg sacks as well as a great deal of Ca Newts huddled in one area. It looked like the egg-laying central!
We also thought it best if the children stayed out of this water area as the waters were filled and busy.

This was so incredibly wonderful: finding the egg sacks earlier and being so very curious what they were and then, the answer came straight away,in person!  What a glorious thing this was!!!!!!

For the rest of the day there was Owen and Puma immersed in this event with the others coming in and out checking on it all. All of them, however, loved playing with Devin in his Spot and going on the airplane.  At one point it was just Devin and Austen, Austen and Devin playing, Avaline, Austen, Devin, Owen in and out and Puma just a little. All and all the play was so beautiful and with a great flow.

Time to go came, more changing of some clothes.

I have started to tell a story at the end of the day which is all about them. As I tell the tale they start to hear that the story is about them but, could it be?  By the end they are laughing with delight that it was all about them.  Their awe and wonder about this is such a delight. The young child is truly a glorious being of grand brightness. 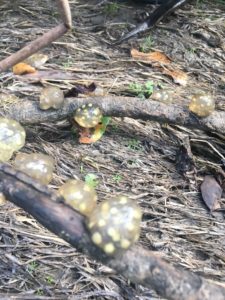 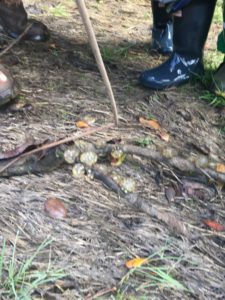