Linda, who worked at Tender Tracks the past two years, was our substitute for Ruby today and all the children were with us. There were a few coughs now and again and sniffly nose’s yet basically, they were all just fine.

We all started out very cold yet by midday we were extremely comfortable under the Redwood Trees. It was when we came out to go home that we realized how hot it was outside.
The morning was filled with bouncy tree time, finding Trilly Trully and Trippy Troopy, going up and down and all around the great Redwood Tree Play house above us, and chasing one another with extreme delight. Playing hide and go seek is a BIG pleasure for this group too.
One of my favorite moments was watching Devin chase Austin and Vita all around trying to tag them!!!   After circle, songs, story, running, getting very warm and then cooling down after sitting in circle we packed up and made our way to the OTHER bouncy tree and Redwood Cathedral.

It was a very fun and explorative grand adventure going through the woods.  We found some incredible white mushrooms growing on a dead log. Near it was another mushroom but a bit different.  We really spent time checking that out and noticing what was the same and what was different. Earlier they discovered that the little fairy houses were stomped down. We were trying to find tracks around it to give us some clues as how this happened.. Instead, they found some tufts of white hair. What could that have been from????  We smelled it, touched it and threw out ideas and queries.

We explored new paths to get to our old spot finding all manner of amazing wonders upon the earth and on the trees. There were all these little dig spots in the ground that we were following too. Squirrel digs?  But, were there any track and sign of Squirrels up the Redwood Trees where they leave their marks?????  We looked and looked but saw no squirrels. I did hear some frogs though.

When we got to our spot, backpacks came off and to the bouncy tree they went.
They had all found sticks just right for me to make them their paint brushes.  I made those while they played on the bouncy tree and climbed the Bay tree.  I was helping them bounce earlier but then I was busy and asked them to help one another. They were HAPPY, HAPPY, HAPPY to do so. Avaline jumped right in to help and Devin LOVED bouncing anyone who would let him.  Vita was busy climbing, bouncing and singing the song that I sang to them for taking turns.  Puma went off on a grand adventure with Linda to the Porta Potty to go poop. When they came back they had something with them as well as stories.

Puma brought back a Banana slug on a rock. The children had a great deal of fun watching this new friend.  We gave it some apple and grape to see if it would eat.  In order to watch without crowding it we just set up our lunch circle and ate around it.  This entertained us thoroughly as we ate. It went crawling first straight to Linda and to her pants to climb, then me, then Puma, then Avaline and then we made a path for it to crawl right back to the woods, which it did.

After lunch, Avaline found the “HOUSE” that they had all played with before.   She was really excited about this and called everyone over.  For the rest of the day, there was incredible fun playing on, in and around this house, until….The roof collapsed!!!!  Avaline said there was going to be an earthquake at the house and, THERE WAS!!!!  Then there was dismantling and making ready to rebuild.  Austen and Puma wound up doing a lot of that. Devin and I were playing hide and go seek and Vita and Avaline were just so happy carrying logs, helping build, direct, climb around…..

We all walked back happily and made our way home.
Today was a truly deepening day.  There was such ease with one another.  Devin is settling in more and more and more and playing with the others. Vita has just been exceptionally happy this entire week, with her self and with others. Avaline was filled with her adventuresome and inquisitive self, Austen came with great exuberance as well as Puma. Both were playing with each other and others and all of them playing WITH one another as a group.

This little group appears to be working well and easily for them. They are a joy!!!!!

This is a gift that Austen left, the snake hugging the little duck.  He often leaves animal friends in significant places like this at the end of the day. 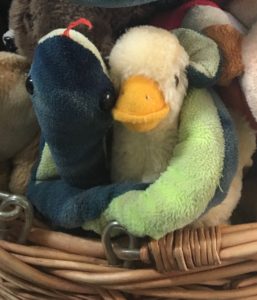