What a different day it was to have the children dropped off instead of driving in the bus.
The Sun and Sky brought a warmer day then we expected so some layers got discarded.  We had a fine circle and a small celebration of the birthdays that are to come this summer with a little yummy treat to eat.

The day was filled with being with this place for the last time this year as we revisited the garden, the chickens and roosters, the walk to the garden, the big rock, the bouncy tree, the creek that is now dry and, for Linda and I, noticing the great changes in them since the beginning of the year.

Jasper is so much more grounded in himself and choosing to play with others instead of just Vita.  Ruthie is just more solid in herself as well as open to the group.  Puma is simply more FOUR, alive, curious, friendly and inquisitive.  Vita is more expansive, physically even more present and alive and Susie is, as well, more grounded in her confidence, connection to the group and open to receive what shows up.  And Oliver, he continues to grow more deeplin in his inquisitive, alive curious self who has been expanded his ability to attract all manner of bugs, and creatures. He and Puma have grown much in their mutual love of these beings.

The garden had a bit of a disappointment as we could  not run around and through the garden area at all. New plants were planted and looking beautiful. This was more challenging for Ruthie who really wanted to wander through the garden plots.

When we went over to the chicken coop the loud Rooster brought hands over Ruthies ears as she does not enjoy their loudness.  The others were very involved with trying to feed them.
We ate near the chickens however because most of them wanted to. We decided to play a little game to see if the Rooster would settle down a bit: we sat still while we ate, stayed calm and then we discovered that the chickens and Rooster did the same!!!!  There was a gentle chicken however in the chicken coop that, on and off, cackled as if it was laying an egg now and then.  We were also serenaded by two men playing guitars near  by.

When we got back to Sorich we wound up looking for vole and mice trails along the creek bed and wound up finding a couple of Rabbit hide outs.  We searched all along that dry creek bed and began to find all manner of holes and possibilities for little animal homes.

We gathered together for our good bye circle and song and then were beautifully greeted by you parents.

I enjoyed watching Puma share the Big climbing rock with his Mother this morning as they both climbed to the top where Puma loves to go.

I specifically wanted to take the children here today because last week four little Dark Eyed Junco babies were born in a small nest right at the base of a Redwood Tree near the bus. 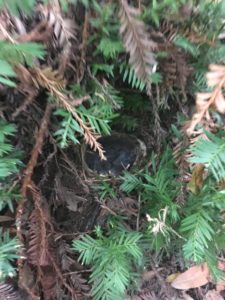 It was very fun to share this with them.  We also had a wonderful visitor with us today. Someone interviewing for the Teacher position for this fall.  The children enjoyed her and as soon as Puma got in the bus he asked if she would sit next to him.

We had a fine circle.  I felt compelled to tell a story that they hear very early on in the year about learning to be very still and wait for the animals to come to them.  It had a turtle in it to and, we went looking for one on our adventure to where we often times see them. But first, up the big stairs, along the long walk way, and one lone turtle sat upon the black long tube that goes across the lake.  Then up the other stone stairs to listen for the Woodpeckers at Woodpecker Heaven.  The children noticed that the mushroom that we saw throughout the winter on a stump was  no longer there too.

As they went down the trail they found the best dirt that was so soft. They simply plopped down and played there QUITE contentedly for a while!!!!!  They all played with this marvelous sensation of smooth and soft earth and then, were ready to move on. We found the “Fairy Pond” in the hole of a tree. This is where the mosquito larvae have been growing ALL winter!  Our new friend called them Biting Faeires. How Appropriate!!!!!!!! A new name has been born:)

We found our place where the sun shines brightly.  Vita had her shoes off for some time now and when we got to our little open area near the lake she discovered the teeny weeny little prickers that were on the plants beneath her feet. Instant sit down and take them out, put shoes on and off she went.

In the lake there were a lot! of little fish. All the children went straight to seeing if they could catch them. It was lunch time so it seemed best to eat in order to get some containers emptied in order to use them for catch and relasing. And that is what happened.

After lunch they went right back to the pond to try and get the fish.  Not as easy as they discovered and not a fish was caught. Puma was trying to jump on them and our new friend reminded them about the story told this am. “Maybe if you sit so still and wait they will come to you!” the idea was mentioned.  But alas, desire won out, fast movement ensued and, no fish caught!!! 🙂

Ruthie and Oliver have historically always been slower on our walks then everyone else but today, today, there was a faster step in both of their feet. Not that it needed to be but rather, it was clear that growth has taken place.

When we were walking back who did we most WONDROUSLY  see on the trail???? A very large Turtle!  Yes, that is right, a great big TURTLE!!  We all came together and sat there very quietly, like in the story, breathing in and breathing out, waiting for it to feel safe. Slowly, slowly, slowly it began putting it’s head out but NOT it’s feet.  Unfortunately we had to move on. Linda thought it would be best to put it to the side so no bicyclists would run it over.  As the children began to walk back to the bus I went to move it. I just went to pick it up on it’s sides but……it hissed and JUMPED as I tried to move it.  I laughed and was startled and just kept doing that until it jumped it’s way to the side of the trail!!!!!!  I LOVE
synchronicities of the stories that want to be told and nature showing itself in collaboration with the tales.  What a fun way to come to the end of our day. And, the children thought it was quite fun to watch me trying to move the turtle!!!!

What a lovely and delightful day!  Please check out our FB page to see some photos.
The weather was easy, kind and gentle and so was the weather of the children.  We have not been here in a long time but, again, the weather afforded us the opportunity to go here without any physical cold to tend to.

At circle we repeated the tale One Fine Day. I was seeing if they remembered any of it. The older ones did and were able to follow with more verbal input and the rest, well, they just soaked it in again.  We then, after circle, went on our adventure to an old familiar place.

We took the  long adventure way through the woods seeing if we could remember how to get to our destination spot. And, we did!  Yet, before we got there we found a great huge fallen down Redwood tree that begged to be climbed on. But…..how to get up there????  Puma really wanted to get up and then, he saw me up there. How did THAT happen???? He figured it out and then the rest followed shortly behind. Jasper got a little nervous at one part and the others showed him how to get back to a comfortable place.  The children were fully engaged with their surroundings and taking it all in with all of their senses!

We then moved on to find the Redwood Grove/Cathedral where they put their packs for when we would have lunch.  Much exploring to do: The bouncy tree, the climbing limb, scrapping the black from the Redwood tree for face paint, finding the hidey hole/spaces in the tree to peek out of, places to sit and enjoy the tree ( Ruthie!!! ) finding different plants and noticing the Poison Oak to stay clear of.  A very full day.

I am going to use few words here with the hope that you will check out the photos and video that will flesh out a little bit more of what we were up to.

I can mostly say about the day: YEAH!, Explorations, Laughter, Playing together, Enjoying the Earth and it’s gifts, challenging ones balancing skills, helping each other out,and continuing to practice how to take turns when YOU really want the turn NOW!