Glorious, Glorious, Glorious Day!
Talay was with us and that was grand!  The Sun was bright and shining with warmth and a cool Spring breeze flowed in and out throughout the day.
As soon as we got there the children found a small and dead Rubber Boa. It appeared to have been run over fairly recently.  We looked at it from many angles. The underside was so different and BEAUTIFUL!!!  There were many thoughts as to what to do with it. We finally decided to put it on the side of the road. Then there were ideas of how to bury it. We put all their ideas together, dug a small hole and put leaves, twigs, rocks and the like on top of it. Aaron and I stayed to sing to it before we carried on with the rest of the group.
The rubber boa (Charina bottae) is a snake in the family Boidae that is native to the Western United States andBritish Columbia, Canada.  The name Charina is from the Greek for graceful or delightful 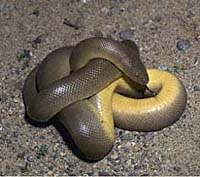 When we got to the first beautiful creek that has a spot that we sat last time for circle we put our packpacks right in the open to receive the warm warm sun. The children then ran straight to the water, rocks and edges of the full running creek.  Alara began her day with finding a beautiful Heart rock and she continued finding them ALL day!   When we called everyone into circle and were about to finish reading our story from Tuesday a whole lot of Bicyclist’s with camera people came by.  We asked who they were and what they were doing. They were very friendly and they were getting their picture taken as they went roaring through the creek.  We of course stopped what we were doing and watched until they finally carried on with THEIR adventures of the day!:)
We finished our story and then back to the water and play they went.  Rhett, Alara, Io, Layton, Velia, Ariel and Talay stripped down naked and got in the water. It didn’t take long for me to see Rhett putting his clothes back on and rolling up his pants to go back to the water.  The wind was picking up and it really wasn’t super warm for this.  Layton was the only one who didn’t really seem to notice the cold while the others, though making comments about it, continued playing with joy.  Aaron was building right next to the water and he and Rhett had some explorations that took place there.
There was the usual poop parties, rock findings, mud playings and then, ‘Let’s get our clothes on’ time.   Michelle and I decided we wanted to take them on a longer walk before eating so off we went.  On our walk the wonders of Spring were everywhere and it was, as is always, GRAND to stop at all these wonders and explore them with abandoned curiosity and awe!  We went along our route that we found last time and all but Talay and Rhett wanted to stop at a beautiful creek area.   Rhett and Talay went a bit ahead so Michelle went to get them and bring them back while we all set up our lunch area.  It turns out however, that the only place to really sit was also a place with a lot of mosquitos!  We did fine, yet it appears that some went home with some nice bites upon themselves!
We had stories and food sharing today and then, into the water.
Rhett and Aaron were really having such a good time throwing different sized rocks into the water. There was a family near us that had a young little girl and a boy about the same age as our kids.  Rhett and Aaron, so it looked, were eyeing him as if wondering if they should invite him into their play. In the end they did not yet it was fun to see what happens as humans and animals alike see others and make choices around what they see.   Everyone else was in the midst of water explorations extraordinaire and then came the getting dressed.  They are and have been for months now, learning so much about body sensations, choices with regard to these, how to tend to ones clothes, how to get dressed when cold or wet, noticing weather patterns in relation to desires and then back to choices and on and on it goes.
We continue to see these three triplet boys that are always out in the woods with an older woman exploring themselves at the many places that we adventure.  It is so very fun to be apart of the community. A community that adores the natural world and loves to see the children and their explorations.  Community building on a weekly basis!!!
Going back to the bus we found our Bicyclist friends, and the many plants that we noticed and enjoyed on our way out.