We had plenty of sunshine for our adventure at Lake Lagunitas! Blake was not with us today and his smile and silly hat were missed by his friends. The children were excited to explore the creek and some foam had collected against the logs in the water. There was a lot of foam poking with various sticks, which would then cause some of it to fly around and Margot had some stuck on her jacket which we all found quite hilarious.

Rohan, Siena and Charlie helped Ruby split some sticks with a knife so we could build a fire for our super special secret surprise snack! The children helped make a nest of soft, fluffy and dry materials for the fire fairies, and then gave Ruby sticks to build the house. We sang for the fire fairies to come and they were being very stubborn. Tender Trackers are persistent, patient, and great singers, so we kept coaxing the fire fairies with our song and soon we had a wonderful fire. Some of the fire fairies even danced in our cooking pan. Our super special secret surprise snack was QUESADILLAS! We got to choose a combination of cheese, avocado and beans and they were delicious!!  A big thank you to Ruby for her quesadilla-cooking skills!

Thoroughly fueled by melty cheese and toasty tortillas, we ventured to the sunny meadow by our climbing tree and took some time to test the branches. Violet, Charlie and Miles also found some sourgrass to nibble. Miles had his first taste of sour grass and he happily munched away on the sour stems. I thought it was very sour, and he thought it wasn’t too sour at all and the children enjoyed a few stalks, after thanking the sourgrass for the treat. If you are interested to try some sourgrass at home, you can munch the green stalk and save the flowers for a yellow dye. For a simple dye, collect the flowers and submerge in hot water (can also be done with cold water) add cotton or wool fabric to sit in the dye bath until color is to your liking, then rinse and dry. Here is a link to more information.

When we reached the top of the steps, Charlie  yelled, ”Puddles!” and proceeded to run through all of the puddles on the trail. We headed out around the lake and Rohan spotted some turtles right away! The sunshine has been bringing them out to bask on the logs. Violet, Siena, Miles and Charlie also found a very long banana slug in the middle of the trail. It scrunched up as we reached out to touch it. Margot munched on some sour grass as she climbed the stone steps. Rohan found a small tree that he immediately dubbed his “Baby Tree” and then proceeded to hug it. That Baby Tree got many hugs from many children. Siena was on the search for more signs of spring and found a purple flower called ‘houndstongue.’

Our adventure led us to the fallen tree with the large root ball for climbing and the branches reaching out into the water. Rohan spotted more turtles in the branches that lay in the water, so we proceeded to sneak out closer. I think I was being too big and noisy because the turtles plopped back into the water, Rohan suggested that next time I should be more sneaky and quiet. I agreed.

Later, Ruby was sneaking out onto the fallen tree, towards the water and heard a munching noise- she’s pretty sure she saw a muskrat! Soon, all of the Tender Trackers were sneaking out, and the turtles returned, too!

After lunch, we took to the trail and played our ‘fire in the forest’ game and ran along the trail as our secret animals for a few rounds. On our way back, all the children visited with the Baby Tree and gave it more hugs. Charlie and I looked for the banana slug from earlier and saw it hiding in a nearby plant.

Back on Juniper Rose, we had so much gratitude for Baby Tree, banana slugs, houndstongue, fire, quesadillas and friends!!

We were welcomed by another wet and rainy morning at Lake Lagunitas, but Tender Trackers are professional rain-rompers and were unfazed by the damp day. We started by meeting the butter churn that would help make our morning snack. Ruby reminded us of the story from last week about Sean O’Hoolihan and Mrs. O’Malley and making ‘gold’ in the butter churn. All of the children got many a turn at the churn, chanting like Sean in the story; “Chuggity clump! Chuggity clump! I’m making gold – a great big lump!!” It took all morning of taking turns among me, Ruby and all of the children, and by snack time we had a delicious lump of golden butter to spread on fresh bread. It was truly a treat and there was much appreciation for the hard work, time and effort spent on making it.

Miles and I made an obstacle course from some found objects and added some sticks, logs and rocks. We invited our Tender Tracks friends to try it out, and everyone had their own style of hopping, walking and balancing through the course.

Charlie and I found a banana slug and a newt and then made a small forest home for a creature. She spent a lot of time on the details of arranging sticks for a mattress, small stones for seats, and finding moss for food. Any small creature would be cozy in the home she built. Rohan, Blake and Miles used sticks to test the depth of the creek and searched for newts. Blake found a long, curved stick for ‘catching’ and herded his friends with it in a new game while Violet, Siena and Margot played princesses in the forest.

We headed up the spillway steps to explore and see if there were any turtles. No turtles today, but we did have lunch at the table overlooking the lake. It got cold and rainy during lunch so we decided to go play some running games down in the coverage of the trees.

We played ‘fire in the forest’ again and chose our animals and took turns asking questions and running from Ruby and other friends. Then some children started a game of ‘duck, duck, goose’ while Violet suggested ‘hide and seek’ so Violet, Rohan, Miles and I started to play and soon the ‘duck, duck, goose’ crew came to join in! Violet began by counting and Ruby, the children, and I all hid. When Violet found me first I burst out and began to run away, but she corrected me that when she finds someone, they then help find the others. So that’s what we did. It was the sweetest game of hide and seek I’ve ever played.

We played a few more rounds and in the last round, none of us could find Ruby! Charlie had the idea that we should hide from her, and if we had more time, I think we all would have hidden in the forest (I am curious how long they’d all hide from each other!) But we didn’t have to worry about losing Ruby because Miles and Blake found her!

Back on Juniper Rose, snuggled under blankets, we shared all we loved from the day, including newts, a banana slug, good friends, rain and, of course, a lump of gold to eat! We hope you all enjoyed the fresh butter we sent home with your Tender Tracker!

What a magically sunshiny day! We were all so happy for warm weather and a day to dry out. Grandpa Sun was high and smiling in the sky and we were joyful to splash in the water!

We arrived to Lake Alpine and Charlie exclaimed, “Look at that big puddle!” the children were all very excited for some ‘big puddle’ play.

The hills were green and fresh with wildflowers dotting here and there. Everyone climbed up the big rock to overlook the lake and search for signs of spring. We spotted a heron perfectly mirrored in the lake’s reflection, and line of turtles perched on a log in the middle of the water. Siena found some small purple flowers which led to her becoming a Flower Fairy with friend Margot.

Miles, Rohan and Blake were busy launching large logs into the lake. Some were gently floated out, some were thrown by many hands working together. Blake challenged me to chuck a big piece of wood into the water, it was a great big splash which we both enjoyed!

At snack we heard the story of Sean O’Hoolihan and Mrs. O’Malley and the milk she churned into golden butter. We enjoyed crackers and rice cakes covered in sunflower butter and raisins and sang about our favorite birds, robin, crow, nuthatch and chickadee-dee-dee!

On our adventure, we went to look at the spillway we slid on a few months ago and found water flowing down making it slippery and wet. We decided to head down another trail and get closer to the lake and sneak up quietly to look for turtles. We all quieted our voices and feet, and as we approached we spotted a log with nineteen turtles on it!

The lake was calling to rain-booted feet and soon many children were playing in the water. We also added to a spiral of stones that was made by other Tender Trackers earlier in the week, Ruby found a crescent moon shaped rock and Violet added it to the center of the spiral. Many children removed boots and socks to enjoy the chilly water on their feet and lovely mud between toes.

We had lunch looking at the lake and enjoying the warm sun and beautiful views. While we had lunch, more turtles joined the log and by time we were done eating there was a total of twenty-two turtles!!

Water play continued and small, flat wooden boats were launched with treasures aboard and sticks were used as paddles and pushers. Ruby pulled a giant log closer to shore and almost all of the children climbed aboard while Violet and I snuggled onshore. Violet noticed butterflies flitting by, and we could see some of the turtles in the water near the log.

On our walk back to Juniper Rose, Miles was leading Rohan (and soon Blake) in a game of Red Light, Green Light. Siena, Charlie and Ruby held hands as they walked together. Back on Juniper Rose, we snuggled under blankets and shared our gratitude for orange butterflies, big logs, water and sunshine! 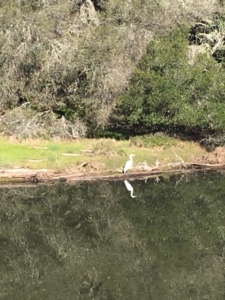