As Ruby and I prepared for the day in Juniper Rose, we had a furry visitor hop on the bus! A neighborhood kitty came to join us and explore while we had our morning meeting. We told our sweet new friend that we had to get going to meet our Tender Trackers and the mystery cat made its way off the bus for its own day of adventures!

At Lake Lagunitas was so alive with springtime! We heard cicadas, noticed ladybugs and darkling beetles, heard turkeys calling, and saw fresh green tips on the fir trees. We visited the sunny spot by the water trough and Raccoon Family play (and stew making) commenced.

There was much plant play and appreciation all morning. The children munched on the tops of rattlesnake grass and gathered fir tips for tea (and snacking.) We launched little shooters with the plantain plant stalks and flower heads. Many wildflowers dotted the space and Ruby and I searched the trees for cicadas. The keen eyes of Miles and Violet found a ladybug, Charlie found a small grub in a log, and Margot and I sneaked up on a tiny tree frog!

At snack time we enjoyed some delicious scones baked for us by Wendolyn. Ruby retold the tale of Douglas Mouse, who hid in the cone of the fir tree while playing hide-and-seek with the woodland animals. The children reached eager hands into the bag of animal symbols to find what jobs called to them this day; Charlie and Blake became Guardians of Safety, Rohan and Miles were Guardians of the Earth, Snack Slugs were Violet and Siena, and Margot was our Weather Watcher!

We set off to explore new spaces and made it to the creek and bridge we hadn’t played at since fall time. The water was nice and low and perfect to enjoy with or without boots! Blake and Rohan here gathering many plants, including Miner’s Lettuce, in Rohan’s hat and transporting them across the creek from the opposite banks to me. Ruby and Charlie, Violet, Siena and Margot went in search of gnome homes, and later emerged with a gnome and fairy boat! It was thick bark topped with moss and a leafy sail. They launched it and we all watched and chased it down to the bridge where it stopped, gently bobbing in the deeper water. After lunch, we saw that it had moved past the bridge and we launched another small boat to join it.

We decided to head back to Peri Park early to enjoy our Fir Tip Tea with our stuffies from Juniper Rose, in a proper tea party! We were very thankful for the two horses we saw, gathering plants in a hat, sunshine, fir tips, scones, and boats. At the park, we enjoyed our tea with the stuffies as the children got re-acquainted with some stuffies we hadn’t seen in awhile (as they had been in the bottom of the basket!) We sang our goodbyes and welcomed family and friends to our party and pickup time. 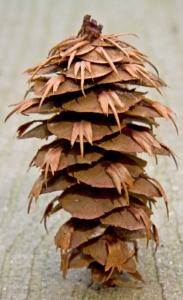 can you see the mouse “feet and tails” hiding in the fir cone?

We started our day with creek play at Peri Park, it has changed so much since our wet and rainy winter filled the creek with fast rushing water. It was much calmer today and friends wearing rain boots splashed across. Miles even found a baseball in the creek!

There was some warm and wonderful weather at Lake Lagunitas and Grandfather Sun was smiling in the sky as we set up in the meadow. There were many new signs of spring dotting the hill, Ruby’s favorite Douglas Iris! We only had four Tender Trackers today as Charlie, Margot and Violet were away on other adventures.

Ruby shared some bird nests from Wendolyn’s special collection and we kept our eyes out for bird nests in the trees around the lake. The children chose their roles for the day from the special bag of animal symbols, Blake was Guardian of Safety (Rabbit), Siena and Miles were Guardians of the Earth (Raccoon) and Rohan the Snack Slug (and official hand sanitizer squeezer!)

While exploring, we noticed some interesting insects- cicadas! We found two that had recently molted from their exoskeletons. We watched them climb the drinking fountain for a good amount of time, one was reddish and one was greenish. They were both slow and quiet. When we listened, we could hear other cicadas clicking and singing in the trees around us.

Before we set off on our big adventure, we dropped off our snack stuff at Juniper Rose. We remember our handprints on the big bus and gave our painted hand some high-fives. Then, a cicada landed on me! It was another opportunity to look more closely at this winged wonder. We took turns holding it and watching it crawl, and this cicada in particular, really liked Siena. It crawled up her arm, tickling the whole way. It stayed on her shoulder, explored her walking stick, sat in her hand. Buggy the cicada accompanied us on our walk, and as we reached Rohan’s Baby Tree, we gave gentle hugs to our favorite conifer and set Buggy on a branch.

Our favorite fallen tree was covered in turtles where the upper branches sit in the water, and we successfully snuck up and many stayed. The tree turned into a Spaceship and then a Pirate Ship! Blake was the captain, Rohan steered the ship, and Miles was in charge of the defenses. Siena and I harvested some cattail fluff. I held her hand as she balanced on a long in the water and reached and reached to the tall stalks. When she had acquired a soft handful, she made me a jacket by pressing some of the fluffy seeds on my shirt. She wore some, too!

During lunch we saw and heard acorn woodpeckers and red-winged blackbirds. We played I-Spy and pointed to the bird calls we could hear. After lunch there was more pirate play and Ruby and I got permission to come aboard. We did very pirate-y things and even got our pirate hooks stuck together!

On our way back to Juniper Rose, we looked for Buggy on Baby Tree, but he had flown away. There was a steep trail that everyone got a chance to climb, (and slide down a little, too)  and Blake was a caring Guardian of Safety when friends tumbled. Once on the bus, we shared our gratitude for a day filled with cicadas, sunshine, flowers, climbing, blue sky, turtles and pirates! 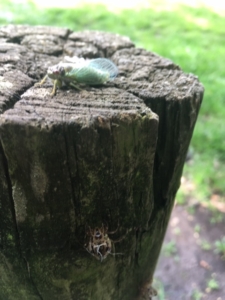 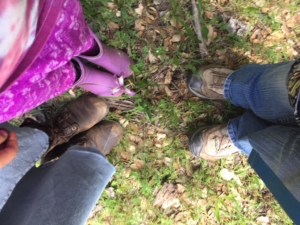 Violet brought some sweet books to share with us and I read them on our bus ride to Lake Lagunitas. The children really enjoyed the stories: Have you filled a bucket today? A guide to daily happiness for kids and Thank the Animals. Blake was not with us today, and we hope he’s having fun on his vacation.

What a wet and wonderful day! We planned ahead and made sure to bring the canopy cover to keep us dry, plenty of firewood to keep us warm, and the little stove to cook something yummy. The children helped Ruby and I set up the canopy for some cover from the rain, and they brought the buckets over to sit on by the fire.

The Lake was very busy today as many school children on a field trip were present and seemed to be involved with a Marin Municipal Water District educational program. They were very curious about our fire and cooking as we went about our morning, we guessed that they had never seen real Tender Trackers in their natural habitat! Soon their program was over, they piled back into cars and buses, and the forest was quiet again.

Ruby showed us how to start a fire with flint and steel as we sang for the fire fairies, who were stubborn at first, but then came to dance in our special fire fairy home in the fire pit. For snack, we had some delicious banana bread shared by Rohan’s mom and we cooked up some warm pasta to enjoy in the chilly morning. The children were very sweet and patient with the morning that felt hectic with visitors and the wait for fires to start and water to boil. They were very content to sing and chat around the circle, while sitting on their buckets.

After snack, the children took to the woods to play a game filled with Queens, Knights, Kings, A Very Fashionable Grandma, A Baby Princess, and I even got to be the Royal Puppy! There was much coming and going around the Redwood Fairy Circle with food deliveries, protecting the castle, and general Royal Business.

The children found a small, dead mouse. Margot wondered if it might still be alive and then we talked about it and realized that the mouse would be running from us if it was still alive. They were very reverent with it and speculated on what might have happened and what forest creatures might find it later for a meal. There were guesses of Coyote, Owl or maybe Banana Slug. Charlie wanted to build a nest-like structure around it and we worked on that for a bit.

Later, Miles found some interesting rocks and one big one that we broke against another rock to see if there were crystals inside. Charlie found a reddish rock that we smashed and added water to make paint. Rohan and Charlie painted their hands with red rock paint.

Ruby taught Miles to tend the fire, as he was interested, and keeping her company as she tended it. He kept watch to make sure the fire fairies stayed in their spot and later helped to put out the fire. The children used their buckets to put out the fire and also cleaned the buckets in the creek to get all the mud off.  Some friends got really wet in this process (but those buckets were so clean!) and some children needed a changing party while other played some rounds of ‘fire in the forest’ with Ruby. Miles and Charlie even led the last few rounds coming up with all sorts of interesting questions (without prompting from Ruby) to ask the ‘animals’ playing, such as “does your animal have fur?” and “does your animal have feathers?”

The children helped take down the canopy and carry all the clean buckets to the bus, too!

At the end of our day, we shared gratitude for the dead mouse, banana bread, fire and pasta… and Grandpa Sun finally came out on our return to Peri Park! We hope that everyone has a wonderful Spring Break!